Lander Retiree finds a passion for the sciences at CWC

George Sims was 62 years old and a few years into retirement when he moved to Lander and enrolled in Central Wyoming College courses for fun.

“I found that old folks could attend CWC tuition-free,” Sims said. “I had no experience with two-year colleges, as they didn’t exist in Louisiana in my youth, and thought I’d take some classes.”

Little did he know, this decision would lead to three associate degrees. 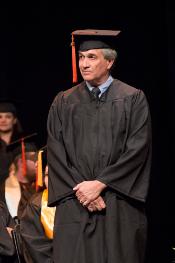 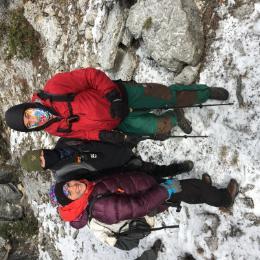 Born outside the village of Mer Rouge, Louisiana, Sims grew up along the banks of the Bayou Bonne Idee. After serving in the Marines, getting married, starting a family, and graduating with a Bachelor of General Studies from the University of Louisiana-Monroe, Sims lived in the county of his birth until his retirement in 2007.

After a six-year stint in the Missouri Ozarks, he moved to Lander in 2013. At CWC, Sims’ first microbiology course inspired him to continue exploring the sciences.

I decided to fill in the gaps in my undergrad degree and complete the CWC biology curriculum. I had returned to college in Louisiana when I was in my late 30s, majoring in zoology. Because of a full-time job, a wife, and four kids, I was unable to complete all the requirements. ”

Sims earned his associate degree in biology in 2015 but didn’t stop there. After graduation, he returned to the college to take another class from his former mentor and professor, Tara Womack.

After taking several of Womack’s classes, Sims helped present her collaborative research project on Polycystic Ovarian Syndrome at the University of Wyoming’s Undergraduate Research Day. Womack said his intelligence and dedication to learning was apparent.

“As a student, he was hard-working, always diligent, engaged, willing to help other students,” she said. “You could just tell he really enjoyed interacting with others in academia.”

Womack also said his acuity was not limited to the classroom.

“Not only was he an exceptional student, but he is a wonderful human,” she said. “He's one of the most down to earth people I know. George is very genial--a true Southern gentleman. He also has a good sense of humor.”

Though he was an asset to his classmates and instructors, Sims said his peers marveled at his decision to keep taking courses after graduation.

“My classmates, who were all one third my age­­, wondered why I had come back since I had my degree,” he said.

Though he was initially baffled by their suggestion that he try nursing school, Sims eventually decided to apply for the program. He was accepted and successfully completed the first term. However, the rest of the program didn’t go according to plan.

“My classroom grades were fine, but my nursing skills were terrible,” Sims said. “I dropped out in my second semester, for the good of mankind.”

Sims did not allow himself to get discouraged. The following semester, he decided to try some of the outdoor courses offered at the college’s Alpine Science Institute.

“My whole world changed,” he said.

“After the first class in environmental science and mountain environments, that Canadian dynamo had this Louisiana geezer excited about glaciers, mountains, snow, and the possibility of participating in their revolutionary Interdisciplinary Climate Change Expedition,” Sims said. “I was physically and mentally exhausted by her enthusiasm.”

Klancher was equally impressed. She said Sims was one of the most remarkable people she’s ever met.

“He approaches every day like it’s an adventure, and tackles every field trip, assignment, and presentation like each is the most important thing he has ever done,” she said. “George is a talented thinker and writer, and readily became someone I turned to when I wanted to make sure a document read well and conveyed the meaning I intended.

Klancher served as Sims’ mentor and adviser during his two years in the ASI program. Guided by her expertise, Sims participated in a weekend snow school field trip on the Continental Divide. He also tracked wolves in Yellowstone, became a certified interpretive guide, provided natural history instruction to elementary students, and presented a second project at Undergraduate Research Day. This time, his research concerned radioactive groundwater contamination from abandoned mine tailings on the reservation.

Under the oversight of ASI instructors Klancher, Darran Wells, and Todd Guenther, Sims ended up taking nearly all of the courses in the program. Of them, he remembers Professor Wells’ outdoor recreation class particularly well. In it, Wells encouraged students to try a new outdoor activity each month. Sims did not take this challenge lightly.

“As a 67-year-old Louisianian who had grown up at 99 feet above sea level, I knew that I had never taken an 18-mile solo overnight hike up onto the Continental Divide, then back down again, in the snow, without dying or being eaten by a bear,” he said. “Darran encouraged me and I showed myself it was doable.”

Wells said Sims set the gold standard both in the classroom and out in the field.

“I felt bad for some of the younger students because he threw the curve quite a bit,” Wells said. “He was such an overachiever, whether he was hiking five miles in knee-deep snow or writing a paper, George took his coursework very seriously.”

In addition to being a great student, Sims was also appreciated by his peers.

“He was a fantastic role model for the other students,” Wells said. “And they loved him. He was happy and excited and always motivating everyone. I was happy to have him in class because I knew it meant morale would be high.”

Sims was accepted for the 2019 ICCE. Despite two years of training, Sims said the 50-mile round trip hike to Dinwoody Glacier exceeded his physical capabilities.

“I withdrew before jeopardizing the expedition,” he said.

Outside of the expedition, Wells said Sims overcame similar challenges in his ASI coursework.

“Even when we were in the outdoors where other students had the youth advantage, George would just make it work,” he said. “He is in incredible shape.”

After several semesters of involvement in the expedition science program, Sims noticed he was one class short of an anthropology degree.

“I immediately signed up for the final class and was treated to field trips investigating historic sheep traps,” Sims said.

Under Guenther's instruction, this opportunity allowed Sims to conclude his CWC education with the excavation of a 500-year-old bison jump and butchering site during the 2020 field school. Like his other instructors, Guenther enjoyed having Sims in class.

“George is a great human being and student,” Guenther said.

Sims graduated with his second and third associate degrees in expedition science and anthropology that May. While he and his wife moved to Dallas to be closer to family, Sims’ lifelong love for learning did not end with his graduation.

“With the kind recommendations and encouragement of Jacki, Todd, Darran, and Tara, I was accepted into the graduate school at the University of North Texas,” Sims said. “I’m currently in my first semester of grad school and taking classes in marine biology and in research methods.”

Though he quickly discovered the difference in rigor between undergraduate and graduate-level education, Sims said CWC adequately prepared him for the next phase of his schooling.

“I firmly believe that the quality of instruction I received in my seven years, the enthusiasm, love and encouragement of my teachers, and the many outside research opportunities at CWC have well-prepared me for graduate school,” Sims said.

While he is attending his third college, Sims knows there is something special about CWC.

“My instructors were infectiously enthusiastic and provided countless ‘outside-of-class’ opportunities,” he said. “They pushed me to new levels, taught me that I could do things I didn’t think possible, and also gave me the chance to learn my limitations. CWC will always be my school.”