Terence ‘Terry’ Cortez said he caught the ‘media bug’ as a kid which led him to a successful path in the entertainment industry.

“I wanted to follow in the footsteps of Wyoming Great, Curt Gowdy,” Cortez said. “I wanted to be like those Disc Jockeys.”

Little did he know, Cortez would use Central Wyoming College’s broadcasting program to follow his dreams to the booming entertainment industry in Chicago.

A Wyoming native, Cortez was born in Laramie, moved to Cody, and later graduated high school in Cheyenne. He decided to attend CWC after visiting the college’s booth on Career Day.

“I attended the booth that was manned by Scotty Ratliff,” Cortez said. “He sold me on all the quality programs and hands-on training that the Riverton campus offered.”

Cortez was drawn to CWC’s radio and television studies, and he immediately hit it off with then instructor Dale Smith.

“He was the one instructor who got the most out of his students,” Cortez said. “I was no exception. He taught us articulation, proper engineering aspects in the operations of a radio station and helped us gain valuable field experience.”

Smith, who retired from CWC in 2008, selected Cortez to travel with him as his team delivered a play-by-play radio show for the Lander Tigers’ basketball games.

While in the program, Cortez also enjoyed the television part of the curriculum. In his second year, he learned to appreciate the production process while working with Wyoming Public Television on a live forum.

“I was in awe with the behind the scenes aspect of television production,” he said. “I loved hearing the director call, technical director switching cameras, video clips and fronting in lower thirds and full screens.” ”

Both the in-field radio and television experiences exemplify what Cortez loved about the college.

“This on-the-job training would take more years to accomplish in a state school,” he said.

Cortez graduated in 1986 with an Associate of Arts in Radio and Television and he immediately used his experience to begin work as a radio DJ for KFBC in Cheyenne.

He was promoted to sports director and eventually advanced to Morning Drive for KFBQ FM. After working in Cheyenne for a few years, Cortez was ready to move on to a bigger city.

“I’m proud to say that Michael Jordan brought me to Chicago,” he said. “The Bulls won their first NBA Championship and the city was hungry for more in-depth coverage.”

Cortez was chosen as the director for The SportsChannel Report and his program, “Live in the Locker Room” became a main staple for the show.

“Live in the Locker Room” provided exclusive coverage to Bulls players and coaches, and focused on Michael Jordan’s postgame comments. Cortez said this was a new concept for the industry.

“We were proud to be one of the first outlets to do Live Locker Room Q & A’s,” he said.

With this experience came several new opportunities. Cortez went on to become the Director for FOX SportsNet Chicago, Comcast SportsNet Chicago and NBC SportsNet Chicago. He also won three Sports Emmys for his coverage of the Chicago White Sox and Blackhawks and was inducted into the Cheyenne East High School Hall of Fame.

As the current director for WGNTV, Cortez won his first News Emmy for being the Top Large Market Morning Show.

From Chicago, he looks back on his time at CWC with fondness.

“I have so many fun memories of Riverton,” Cortez said. “We had many instructors who pushed us to achieve bigger and brighter goals.” 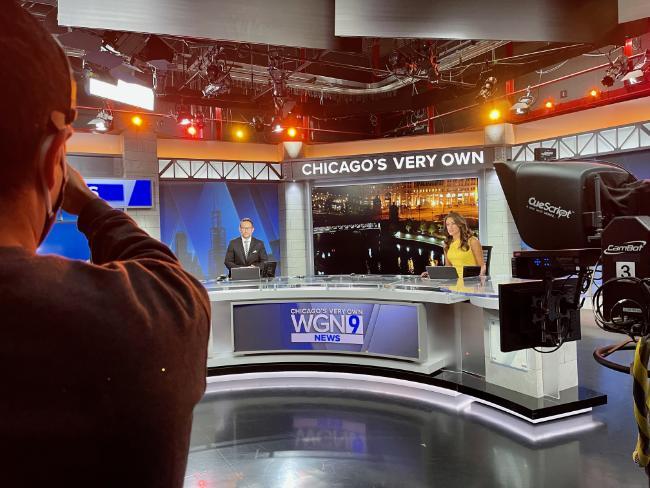