Central Wyoming College archaeology students are conducting a five-year glacier re-photography project as part of the annual Interdisciplinary Climate Change Expedition in the Wind River Mountains. ICCE is the capstone project for students at the Alpine Science Institute. The re-photography project complements the work of the ICCE-Glacier research team on the Dinwoody Glacier, and provides remarkable documentation of glacial recession during the last hundred years.

“Archaeological and geological evidence allows us to trace the retreat of the glaciers over thousands of years,” said  Todd Guenther, professor of anthropology. “And my colleagues, Jacki Klancher and Darran Wells, lead glaciological research teams documenting current changes in the glaciers. But the incorporation of historic visual images inspires visceral reactions, and aids our comprehension of the remarkable loss of glacial ice during the increased industrialization of the twentieth century.”

Archaeology students under Guenther’s guidance have hiked many miles above 12,000 ft to relocate sites from which early mountaineers photographed some of Wyoming’s largest glaciers. During the 1920s, barely a half-century after the end of the “Little Ice Age,” the glaciers were still relatively massive compared to today.

Historic photos in the Pioneer Museum’s Fourt and Presgrove Collections provide the basis for much of the photographic research. Mountaineering and photography in the Wind Rivers grew in popularity during the 1920s as local explorers and climbers from around the country came to revel in the alpine beauty. Eminent among them was Edgar H. Fourt (1864 – 1934), a pioneer lawyer, judge, and mountaineer in Lander. In 1895 he was appointed to the board of the Wyoming State Agricultural College, now site of the CWC Alpine Science Institute near the mouth of Sinks Canyon. The Presgroves ranched on Sweetwater and later ran dude operations into the Winds.

We hope to compile an extensive collection of chronological photo evidence of glacial fluctuation and recession through time. This could then be used by students as a vehicle for climate change and environmental conservation education for fellow scientists, as well as the public. These pictures are indisputable proof of glacial change and, therefore climate change; we hope to make this known and easily understood. ”

Those mountaineers were not the first to inhabit the glacial region around Gannett Peak, upper Dinwoody and the headwaters of Bull Lake Creek. The whole area was heavily used throughout prehistoric times. CWC archaeology students have documented evidence that large numbers of the first Americans frequented the area beginning about 13,000 years ago at the end of the Pleistocene Ice Age. During that era, when hunters still pursued wooly mammoths, the glaciers were massive. CWC students have also recorded hunting complexes and large village sites where groups numbering as many as several hundred people at a time camped between 10,000 and 12,000 ft in the Winds to hunt bighorn sheep, elk and even bison.

“We talk about impacts of climate change around the world but our local environments are always the ones we hold dearest in our hearts,” said Mara Gans, from Lander, a crew chief on four ICCE-Archaeology expeditions with considerable experience in the Winds. “The glaciers of the Winds are what make Wyoming, Wyoming. They provide the water we drink, and the resources that fuel our agricultural and recreation-based economy. They support the wildlife and our beautiful wild places that make Wyoming one of the best places to live. Due to the importance of glaciers to our state and its people, it is crucial that we understand the threat at hand and how much ice we are losing.”

Most of the ICCE archaeological work has been supported by EpsCOR and the Wyoming Cultural Trust Fund. The Historic Fourt and Presgrove Collection photos appear courtesy of the Fremont County Pioneer Museum. Eventually, Guenther and the students hope to create a traveling photo exhibit to share their results with the public. 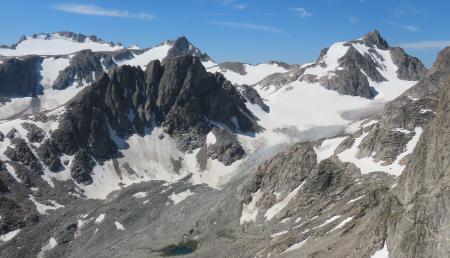 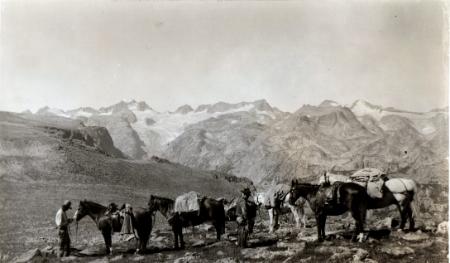 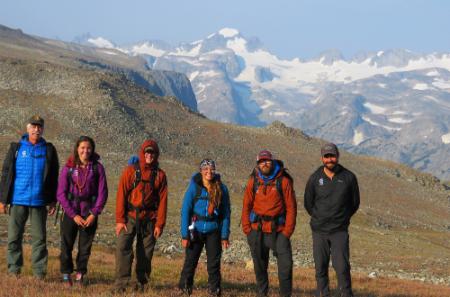 Circa 1922 photo of Fourt’s pack string (top) showing Gannett Peak and the once much larger Gannett Glacier in the background with the 2018 ICCE-Archaeology team standing  in the same location. The archaeologists carried their supplies on their own backs. Mara Gans (second from left), said, “While there are many ways of recording glacial retreat, I find rephotography to be one of the most striking ways to share that story. The ice loss is obvious in these photos, and it evokes a strong emotional response. I hope that this response can be a call to action for the people of Wyoming to conserve this irreplaceable resource.” 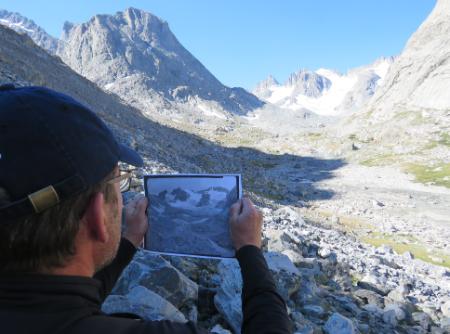 Comparing a 1950s photo of the Dinwoody Glacier to its current, much smaller state, during the 2016 ICCE expedition.