Three faculty members and three Central Wyoming College alumni are in Innsbruck, Austria for Frozen Pasts, an archeology conference October 9-17. The group was invited by two people; a person from the Norwegian University of Science and Technology who saw a post on County10 from 2015 and someone from the Institute of Arctic and Alpine Research of Colorado University in Boulder.

Jacki Klancher, Todd Guenther and Darren Wells have spent several years taking students to the Dinwoody Glacier in the Wind River Mountains each summer to conduct research, not only on the glacier but also on archaeological finds in the surrounding area. Their research has been a work in progress, studying not only the glacier but the environment around it.

CWC alumni Morgan Robbins, Nico Holt and Crystal Reynolds have all been key researchers at the Dinwoody Glacier; and with the support from faculty all will present a paper on their findings.

I am really looking forward to getting to enjoy other presentations from the European part of the country. I am also excited to learn about new and old projects and what others are finding. ”

Reynolds, who was part of the archaeology team, helped survey to find all that they could near the glacier. Some of her findings included finding a projectile point and a hearth and pulling carbon out. She also conducted dig shovel tests at a site from last year and walked the glacier to get a good outline map of the fingers.

“I walked the glacier not only to map an outline but to also take pictures of Jacki and Nate Guenther who were working the GPS to get that map,” Reynolds said.

Although each professor comes from different areas of study and teach different degrees at CWC, all have been vital in the research conducted and have integrated the courses for the future success of research in these fields. It’s been three years in the making to work together to bring these fields together and to benefit the research.

“Geospatial Information Science and Technology is now needed in archaeology,” Guenther said. “Technology has changed so much that it is imperative to use the skills and technology from that program to implement it in the world of archeology.”

Remote sensing, ground penetrating radar, global positioning systems and geographic information systems are all highly technical skills in the geospatial and geophysical realm used by both environmental scientists and archaeologists today. These techniques not only help map and measure ice depth but can also be used to look for human artifacts, such as spears and other tools, which could not be seen without this equipment.

The importance of these areas of study is not only understanding the environmental changes throughout time but also knowing some of the effects on the environment.

“We can see changes in the surfaces growth or patterns that can serve as an indication of human inhabitation or disruption throughout time,” Klancher said.

Wells, who teaches outdoor education and leadership, has been an asset to the group. With the rough terrain and high elevation to get to the glacier he provides the necessary mountaineering and outdoor skills needed to complete a successful trek to and from the glacier.

“Having a team with strong wilderness skills from Darran’s outdoor program is crucial,” Klancher said. “His program provides eager and fit field trained researchers. The more our students cross train in all of these programs the stronger our students and the programs are going to be.”

Wells will also be presenting with Klancher on the ICCE expeditions and about the Paleo-Indian site at the foot of the glacier from the end of the Pleistocene to present, which is the last 12 thousand years.

Klancher will also discuss how climate science, glaciology science and hydrologic science all contribute to the field of archeology. Guenther will focus on the Dinwoody Bison Jump that he and his students discovered about a year ago.

“This research will be years in the making and from what we have found covers a couple of thousand acres,” Guenther said.

This controversial material has had many speculate on why a bison jump would be so high in elevation and why people would inhibit the area. 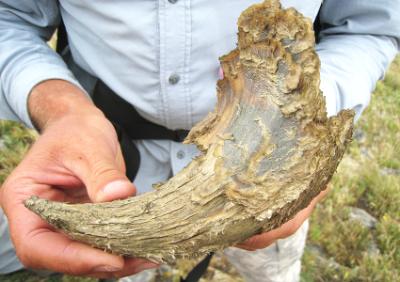 “We must be thorough in all the research that we do,” Guenther said. “This jump is at least three thousand feet higher than any other buffalo jump found in North America. People often ask why buffalo and people were that high in elevation; one theory is that they wintered there but many have speculated on whether people could have wintered there. But everything people needed to live was up there,” Guenther said.

The process is to continue to collect soil samples for fungus for herbivore gut content. Soil chemistry can also show decomposition of bone. Recently the team conducted research on trees from the area.

“We’ve collected dendrochronology tree slabs which we expected to date back to about 150 years but they actually dated back to 1200, 1400 and 2100 years and were most likely white bark pine,” Guenther said. This era would have been at the height of the buffalo jumping era.

The group will return from Austria Oct. 17 after meeting and listening to other researchers from around the world.

“I’m looking forward to networking with other environmental scientists,” Klancher said. “And telling the world what we are doing with ICCE and that ICCE works to engage students in original scientific research in numerous fields. It will also be exciting to hear what other groups are doing as well.”