Central Wyoming College shared its support for the Ghostlight Project Thursday night outside of the Robert A. Peck Arts Center.

CWC students, employees and community members gathered together with flashlights for the Ghostlight Project in solidarity with The Public Theater in New York City and other theaters across the nation. The Ghostlight Project was inspired by the tradition of leaving a "ghost light" on in a darkened theater as a means for safety.

The meaning behind the "ghost light" now is for artists and communities to make or renew a pledge to stand for and protect the values of inclusion, participation and compassion for everyone, regardless of race, class, religion, country of origin, immigration status, disability, age, gender identity or sexual orientation.

Now is the time for empathy and strength when people are scared and unsure. We wanted to make the theater a place where people can be themselves and have open and honest discourse without fear of judgment or conflict. ”

There were four that joined in the movement including CWC. Other theaters were Riot Act, Inc. in Jackson, Associated Students of the Performing Arts at the University of Wyoming in Laramie and Queens Players Theatre Troupe in Laramie. Fehring's former supervisor from The Public Theater asked if CWC's theater would participate. 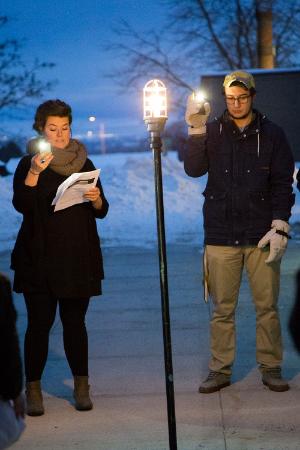 "We had a great turn out," Fehring said. "I think it was a healing process for all that attended. It was the first time we really made a commitment publicly that wasn't part of a classroom and we opened the experience up to the community."

The idea behind the ghostlight is for it to remain lit until it is no longer necessary. CWC's ghostlight will remain lit inside the theater.