Classes have started, the cafeteria has opened, and the campus is back to normal-ish. Something that is unordinary is that many of the Central Wyoming athletes cannot compete until the spring semester, due to the novel illness going around the world.  Lucky for the Rustler XC team, they are able to compete now more than ever!

The cross country team has expanded dramatically from last year, recruiting eight men (compared to four) and five women(versus four).  The cross country team can be seen practicing on a daily basis (if you’re up for watching), this team is going to great lengths to become regional champions, by hosting practice at 5:50 am Monday through Saturday.  The dedication and work ethic shown by these outstanding athletes has not gone unnoticed.  The Lander Journal (a Fremont Country newspaper) had published an article on the runners, two weeks after the first practice debut.  Randy Tucker snapped a photo of the Rustler men shortly after a Saturday 8-kilometer time-trial.

The season officially opened for the Running Rustlers on August 29th in Valentine, Nebraska.  It was a dual meet against a regional rival: Southeast Nebraska College.  The race consisted of a narrow gravel path nestled between a dense forest of trees and complete with a half-mile long bridge.  The course was no easy feat, with the men running almost 5-miles and the women running over 3, it proved to be a particularly difficult challenge.  But, never fear the Running Rustlers took the challenge head-on.  Both men and women cross country runners won the race.

After the grueling competition, the Rustler’s headed back home in the team van for an eight-hour excursion.  Only stopping twice, once for subway, and once for ice cream of course.

I have always loved cross country, ever since my mom started training for one of her first marathons.  She always let me ride my bike alongside her, and I’d encourage her every step of the way.  But, by second grade, I wanted to become a runner too.  I, of course, finished watching the last events of the summer Olympics on television, and I wanted to be an Olympian and run a marathon with my mom.  So my mom started training me, before wrestling practice every day, we would head to the local track and run laps.  I remember my time for my first ever mile at a 9:46, which is pretty substantial for a 45-pound kid.  I wasn’t old enough for a recreational track team until fourth grade, and that’s where I improved by leaps and bounds.  I eventually ran my first official cross country season when I was 11.  It was so perfect and fun.  I was the kid with the most determination, and absolutely no one got in my way.  Following high school, I had placed 8th at state cross country and had been a regional runner-up two years in a row.  My fastest and proudest time was 19:21 which I ran the day after my grandpa’s funeral.  I ran for him.

Now I am a second-year runner for Central Wyoming College and cross country has definitely helped me as a student.  I have always had around a 3.5 GPA due to my hard work ethic that is most evident when I run.

I love the toughest, hilliest, and snowiest courses. Difficulties don’t scare me; they make me hungry. ”

So when I have a challenging assignment or class, I tend to do better than in an easy, or low maintenance class just because I am happy to complete a hurdle.  For this season I am hoping to run in the nineteens once again and be all American, so I can get a potential scholarship from the University of Wyoming.  I have grown into an almost team captain position, without the official title this year.  Trying to get the girls on the cross country team to stay involved and close, by hosting movie nights at my apartment on campus.  I am also encouraging the other girls on the team to stick together on the long-distance runs, as well as the speed workouts.

The cross country season will continue to become tougher by the week as the courses become more challenging, along with the rivals.  Next week the team will head to Carr, Colorado to race with Colorado Mountain College.  The regional championships take place in Alamosa, Colorado on October, 31st, hosted by Trinidad State Junior College.  And nationals in Fort Dodge Iowa on November 14th.  Lookout in the papers, because there is a new winning team in town!

The CWC Cross Country team at their first meet for the season in the fall of 2020. 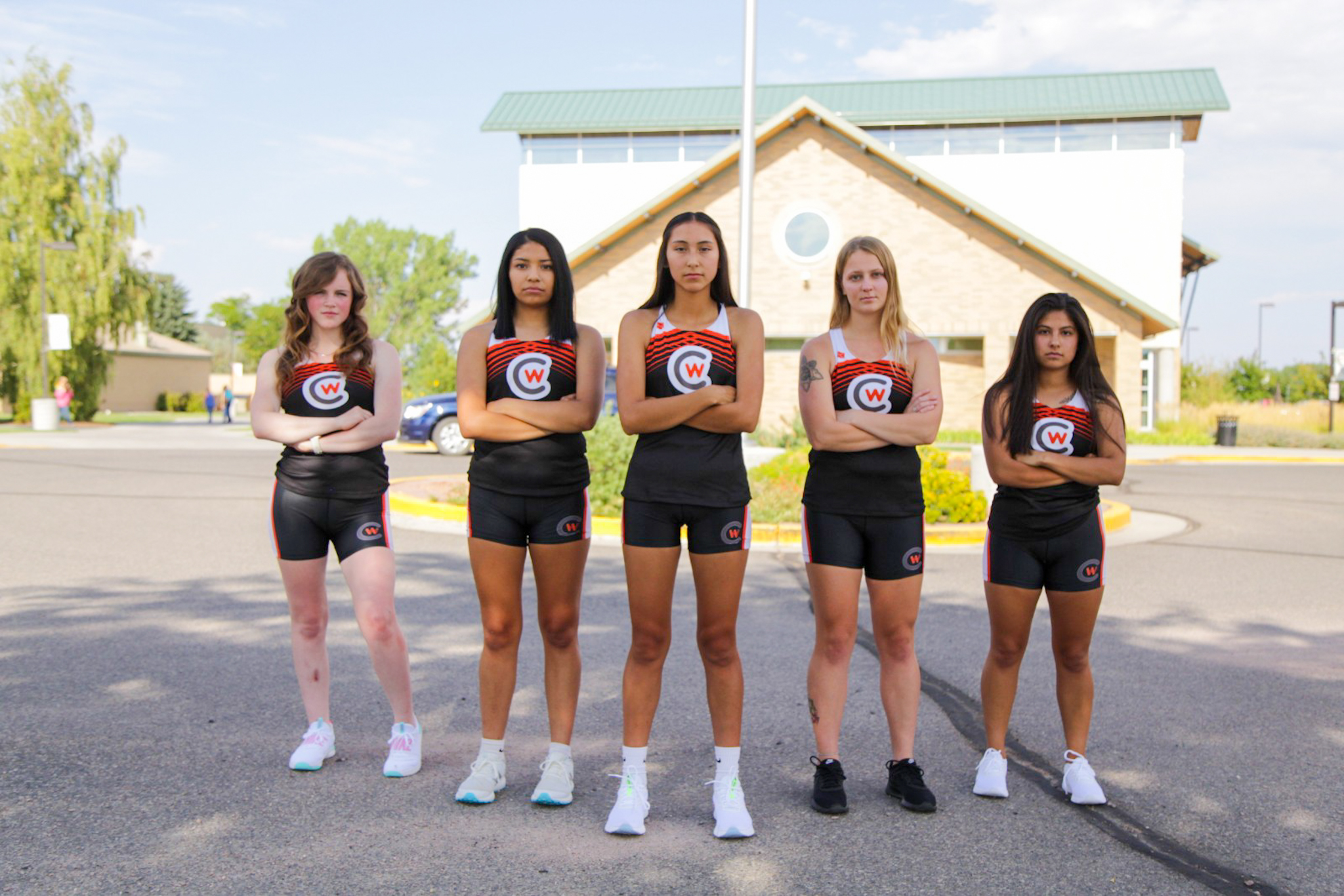