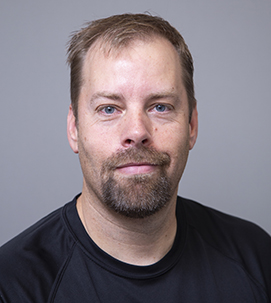 I love student's creativity. I love it when kids take the knowledge they've been armed with in class and take it to another dimension.”

John began his teaching career at CWC in the fall of 2008, bringing with him years of radio and sportscasting experience. John is the general manager of Rustler Radio, CWC’s student-operated radio station. After graduating from the University of Wyoming in broadcasting, John worked at stations in Laramie until he moved home where he was general manager for a Riverton radio station. He has 25 years experience as a sports play-by-play announcer, and enjoys teaching his students the “tricks of the trade” by having them broadcast Rustler volleyball and basketball games. John has been named the Wyoming Association of Broadcasters Best Play by Play and Sports Announcer, several times. He received the distinguished award from the Wyoming Coaches Association Hall of Fame and the Wyoming High School Directors Hall of Fame.

Among his accomplishments John aslo co-founded Wyopreps.com, a website that the state of Wyoming uses for all high school sports.

Bachelor of Arts in Radio and TV Broadcast/Production, University of Wyoming